Long weekend! Ah what a bliss! Family time, cooking time and time for all things fun! It started with a lazy morning – I sat in bed till 9, sipping my cups of tea and reading! This is so rarity these days that when it happens, it is a big deal! Big enough to blog about it.

On that note, let me tell you a story. I grew up India during the 80s and 90s. India was undergoing a change at that time (it still is but the change has been different for every generation). For a patriarchal society, the women were working and becoming independent. For my mom’s generation it was in traditional roles like teaching and nursing but the girls of my generation, the avenues were opening up, at least in the urban sprawl (it would take another decade before some regional areas reached there).

A big part of it was the embedding of “Hum Do, Hamare Do”. The educated urban couples were not having big families. “Do ya teen bacche, hote hain ghar mein acche” was being taken as a mantra and the large joint family system was giving way to the small, nuclear families.

I grew up in such a household. Both my parents were well educated, my Dad a scientist and my mum a post graduate. Even my grand mother was the original feminist. After my grandfather died at a young age, she brought up 4 kids on her own( the extended family helped) and made sure all of them were educated and married well. My dad was shaped by a strong woman like her.

Even though my mom did not start working till all of us started school, I grew up seeing my dad helping her in the kitchen and doing his load of household chores. I won’t say that their relationship was like what I have with my husband but they still set up the blue print for what to expect. My parents ensured that there was no expenses spared in educating us and there was no discrimination between my brother and both of us girls. I grew up in an environment where my parents made me believe that I can achieve anything and being a girl has nothing to do with it. We were encouraged to share our thoughts and ideas and while my father would vetoe some of them, our individuality and thoughts were never curbed.

My dad used to wake me up with a cup of tea every morning till I got married (he has made the morning cuppa for everyone since I remember) and my husband has been doing since. Neither my dad or my husband will be called the most romantic of men. They don’t remember dates for important events, nor do they bring flowers or buy jewellery but they show their love in things that matter. My husband takes care of me and Yash sometimes at his expense and always puts me above his needs. He is not a tea drinker but since the past 16 years has been making tea for me every morning coz he knows that it keeps me going. Over the period of time I have realised that love comes in various forms and expressed in different ways and I love my husband for what he is and does rather than expect him to be based on notions.

That was the story on the tea! We were going to my friend Aman’s place to celebrate Holi. There are people who come in your lives to stay and make you feel blessed and they fall firmly in that category. They have moved to Canberra but we have remained in touch and try and meet as we can. Aman holds the Holi get together and this year was no different. The kids had a gala time. Check out the collage! 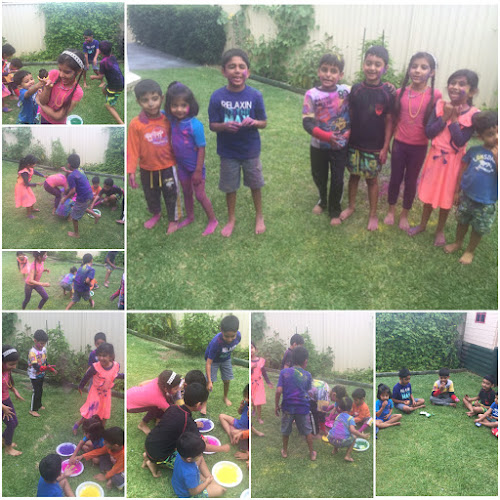 I have come to a stage in life where I feel blessed to have my family and friends around me. Practising gratitude build positivity and I have focussed myself to do that rather than get sucked into the craziness around us. Let us be thankful for what we have rather than pining for what we could have. On that note, till tomorrow…..