I had planned a lot to do yesterday but a bout of insomnia ensured that I woke up at 330 in the morning. This essentially meant the whole day went in a daze! My detox went out if the window too. I was tired and grumpy. It was cold too. This meant that all I did was had cups of tea and watched TV on the couch. The only other thing I did was cooked chickpea curry and poori. The weather dictated that I have some comfort food and what better food than poori! Here is yesterday’s dinner. 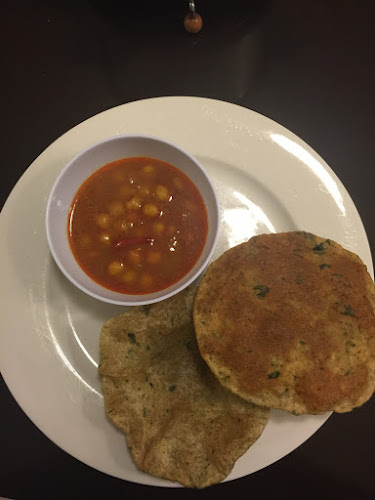 So I blogged yesterday that I will write about my experience with the arranged marriage and the guys that I met. Don’t get me wrong, I am not against arranged marriage. I had one and it is a success. But the whole process is hilarious and mostly really humiliating for the family of the girl. Girls are considered second class citizen in Indian society and so the whole process is tilted towards the boys’ side.

I belong to the kayastha community. Though highly educated, they are traditionalists and conservative at heart, partly because they are concentrated in areas like Uttar Pradesh, Madya Pradesh and Rajasthan, the states that are not leading in terms of women empowerment. Dowry is a norm and the boys side openly ask for “cash” and “kind” which is directly proportionate to the boy and his education and job. It doesn’t matter if the girl is as educated or in a better job. I am talking about 15 years ago, things are better now but some things like expectations on girl’s family remain the same.

Even though my family is very liberal and we were brought up with very modern values, when it came to marriage, my parents went with the normal channel – newspaper advert, common friends and family and website( still new a decade back). I had not given them an option, I had no one In horizon that I wanted to get married to. That started my hilarious journey of receiving photographs, shortlisting candidates and then my parents doing the first round and me doing the second in the hope of the right man.

This one was referred by a common friend. The guy was working in USA but his family was based in Chandigarh. The guy was visiting to find a suitable wife and our common friends felt that I would make an excellent wife to him. So off we went to Chandigarh to meet their family – my parents, our family friend and I to meet the boy, his sister and his parents. We met at a coffee shop. After a little bit of chit chat, we were asked to take a stroll so that we can talk to each other “alone”. The guy was not bad looking and was very educated. So we started chatting. He asked me questions around my background and education and I asked the same. He asked me my ambition and I was honest that I wanted to work all my life and make a career. At that point he became quiet. I was 21 and did not take any notice of that.

We were then invited to visit their home. The guy went straight to his study and his parents and sister made small talk while we had tea. We came back home and the message came through our friend that he did not like my very straightforward attitude and the fact that I wanted to work *rolling eyes*. This is a guy who was a software engineer by profession and had been living in America for a few years. But he was looking for a demure, quiet house wife which I was not. Good decision by him and for me!

That encounter gave me even more courage and conviction of putting fwd my view (causing hilarious situations later on) as I knew I will be miserable or a killer if I married the wrong man. Till tomorrow….