Nothing happened yesterday! I was sick with blocked nose and sniffles, so I stayed in bed. This is my new reality – winters start and I get bad cold. I guess this is the downside of getting old. But as there is no cure for common cold, all I did was kept myself warm and had my trusted lemsip at night for cure.

I cooked our ultimate comfort food for dinner last night – egg masala bhurji with paratha. Quick and easy, it is my favourite dinner in cold nights when you don’t want to stand in the kitchen for too long. Here is the picture to prove it! 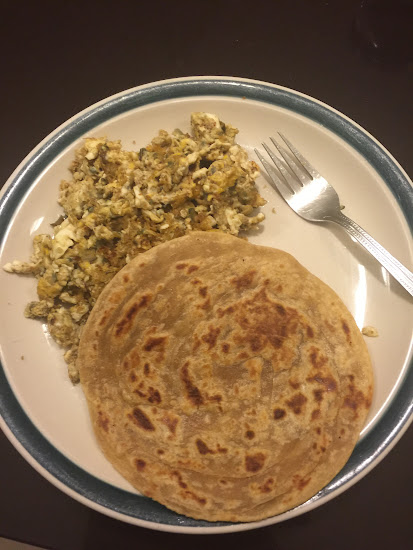 Today’s movie review is for a classic that has withstood the test of times and still remains everyone’s favourite.

This movie is set in the 70s when life was simple. You did not have a lot of money but happiness was abound. Our hero, Ram Prasad (Amol Palekar), lives in a modest house with his sister (Manju Singh, in one of the few roles she did). His parents are dead and he has a maternal uncle(David) in the name of other relatives.

Now Ram Prasad is shown to be fond of all good things in life like sports, music just like any other young man of his age. He is looking for a job after completing his education when he is advised of a job by his mama at his friends office called Urmila traders.

Urmila traders is owned by Bhavani Singh(Utpal Dutt) who is a traditional man. He likes man with moustache, ones who have no other interest except studies and wear traditional attire. Groomed by his mama, our hero manages to impress Bhavani and get the job.

When Bhavani sees Ram Prasad in a hockey match and confront him, he lies to say that he has a twin brother, only this brother has no moustache. The rest of the movie revolves around Ram Prasad’s effort to keep up his lie. This includes getting a lady to become his mother(Dina Pathak), teaching music to Bhavani’s daughter Urmila( Bindiya Goswami) as Laxman Prasad while maintaining his facade as Ram Prasad.

The movie is a gem and the recent movie “Bol Bachchan” has been inspired by it. The music by RD Burman is also great especially the song “Aanewala pal Jaanewala hai”. If you haven’t watched the movie, you will be one of the rarity. If you have watched the movie, go ahead watch it again. It is one movie that can be watched repeatedly without getting bored.