The weekend is over and we are back to Monday, a new start to a new week. This weekend was frantic and busy to say the least. After all it was Diwali!

I don’t know but I have always been partial to Diwali out of so many festivals that we celebrate. Probably because I love lights and it is called Festival of Lights! My memories are associated with lighting the candles on our roof with my dad and my brother and sister while mom was busy in the kitchen preparing the feast. The whole thing was a ceremony, with us first making sure that all candles are fixed with a little warm wax and then after the Pooja light them all together at the same time hoping that the wind does not blow them away! Then we would stand back and look at our lighted house with a lot of pride. When we moved in our house last year, that was one of the things we ensured we did so that Yash can build the same memories as me. Look at our lighted house! 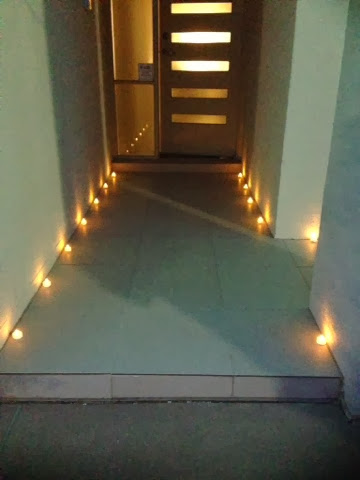 The Pooja itself was also very elaborate. Usually the handiwork of my dad, he would painstakingly fill all the earthen diyas with mustard oil – we usually got around 50 for the whole house. All the silver coins and the new money notes were put in front of the goddess laxmi in a bid to entice her to come to our house and stay with us. Goddess laxmi is the goddess of wealth in Hindu mythology. The doors of the houses remained open but even the thieves stayed away so as not to earn the wrath of the goddess. We would then all dress up in new clothes to do the Pooja together as a family. It was a real bonding time. I am doing my bit here to ensure that Yash gets the feel. Check out my decoration and Pooja. 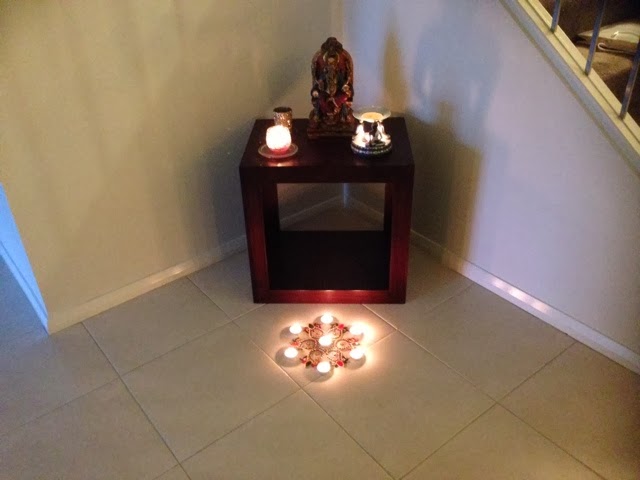 After the Pooja was cracker time – who could make the most noise or had the most elaborate lighting crackers was the competition in our neighbourhood. We would all gather in the streets to blow up the crackers together. It was a time for bonding, eating and being merry. As we cannot have crackers here in our backyard, we got sparkles for Yash. He lighted up with his dad and the pleasure on his face was bliss. 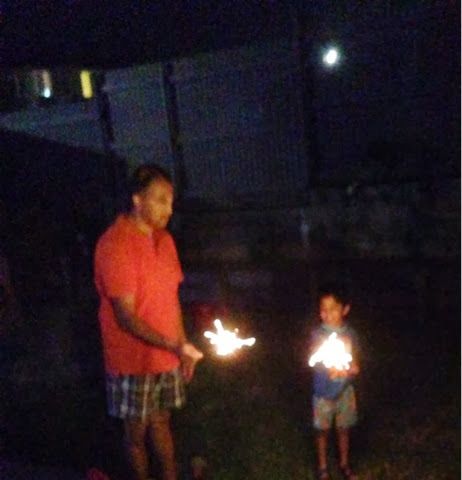 Ah the memories! Festivals is the time that I miss India and my family coz just like Christmas, Diwali is about spending it with your friends and family. Next year I vow to be more organised and have a party at home so that I can create a similar atmosphere here! Till next year!
We had organised to celebrate Diwali at work, so I wore my ethnic garb. The kurta was custom made for me in India and mum chose the fabric. I wore it with black tights, traditional jhumki earrings and a red bindi. Here is a pic of mine! 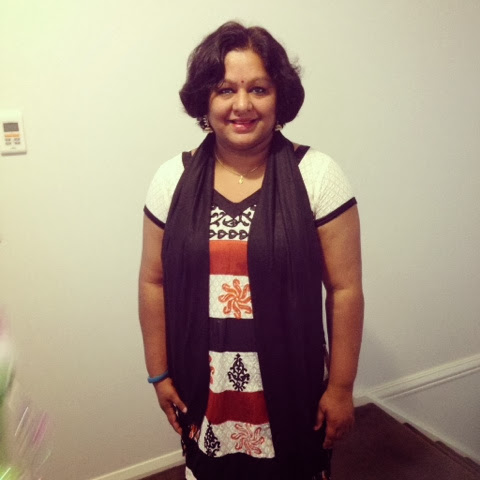