Skip to content
So this weekend started with a bang…the bang of thunder and lightning. I had barely reached home on Friday evening when it started pouring….it was awful weather and I was so looking fwd to the wine tasting at Kat’s place…..but alas!! It was not to be…by the time we reached M4, we could barely see the road….thank god, Avi is a good driver:-)

The wine tasting was good….we had fun with the usual group of friends…it was comfortable. Ornella is so good with kids…..she loves playing with Yash and so does Yash…I can’t wait for her to have kids….Yash will have play mates.

Yash has started to pull himself up as I mentioned in my previous post. Now nothing is safe in our house….here is a picture of him standing in his cot ready to jump. He does not want to sit anymore but just want to stand and move. 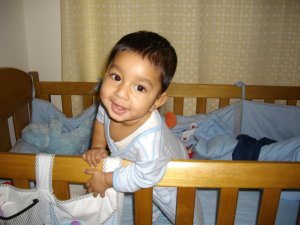 Saturday was another day….It was Kama’s housewarming. We reached exactly at 5:00 pm. it was fun…I had a few glasses of Sangria while Avi was taking care of Yash….I felt so guilty afterwards about that. But I haven’t drunk in ages. So I was hell bent on having fun!! It turned out to be a fun party…i had my doubts previously as the invited were an eclectic bunch of people but I was pleasantly surprised. I had lots of fun!! I would have loved to stay a bit longer but I think it became a little bit too much for Yash with 2 nights in a row of socialising. He started getting cranky and that was the cue for us to leave for home. Here is a picture of him all dressed to go for Kama Aunty’s party.