Another day at work! Today was special as Yash accompanied me to work for the second time ever. He was very excited, I was not! Imagine having a 5.5 year old, energetic and curious boy at your workplace, 2 things that don’t mix. But I had little choice. With tradesmen coming to the house, I could not have left him at home with avi.

He loved it! He roamed around the office, chatted to the dozen with everyone, and played on the computer. Overall, it was not bad. But I still had my mothers hat on at work and I never like to mix the 2.

With Yash around, I missed breakfast. I was meeting Maria after over a week. So we went for lunch together with Nell, Michael and Tim who joined us later on. There is a roast place near our work which sells the best value meal. I had the peri-peri chicken and grilled fish with roast potatoes, Mexican rice and chips. The chips were for Yash. That is all he had for lunch!

I left work at 4 coz that was the longest I could have him at work. On my return, I was exhausted. Avi had not cooked anything as he had been busy with the tradespeople all day. So we decided to get a takeaway.

We have finally discovered an Indian place that we like. It is called Tandoori Garden. We had got a take away a few weeks ago and it was delicious. So we decided to try again. I felt like having a vegetarian meal. So we ordered Palak Paneer and Malai Kofta with Aloo Paratha. And we were not disappointed! The food was well cooked and delicious. It was not too oily and the curry had the right balance of spices. Below is the pic of the meal. Till tomorrow…….. 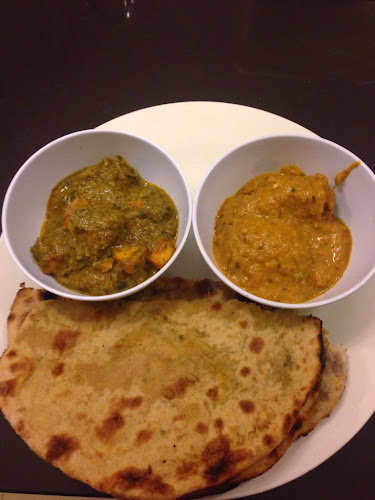