We have a saying in hindi – मन चंगा तो कठौती में गंगा। It means that a happy heart indicates you have achieved everything. I have learnt the depth and true meaning of it in the past year.

When I was younger, I was very career oriented and materialistic. The top things on my list were getting the latest gadget and earning more and more to afford the things I desired. For this, my career, my work took precedence. But after feeling a burn out last year, I took stock of things and realised that I was wrong! Your health is your real wealth and if you are not in the right environment, you do not feel right. Negativity and toxicity bring you down and you don’t know the difference till you get out of it!

Since last year, I have made a vow to myself and my family that our priority is always us. Life is too short to not be happy and that costs less than what we think. Stress causes more harm to your body than you realise. I can say that from personal experience. Anyone who has met me and seen me in both my avatars will tell you what I mean. So grab your life with both hands and live it to the max! Time flies before you know it….

My past few days have been a blur! Friday was uneventful and weekend was busy. I had gifted Avi this craft beer walking tour from Foodi. So he was out for entire day. Yash and I in the meantime enjoyed at home eating junk, watching James Bond and playing games. Avi loved the experience and we loved our day at home. I cooked as usual – this time butter paneer masala for my darling son with some homemade methi roti. Vegetable vermicelli for Avi and I was a hit too. Here is proof! 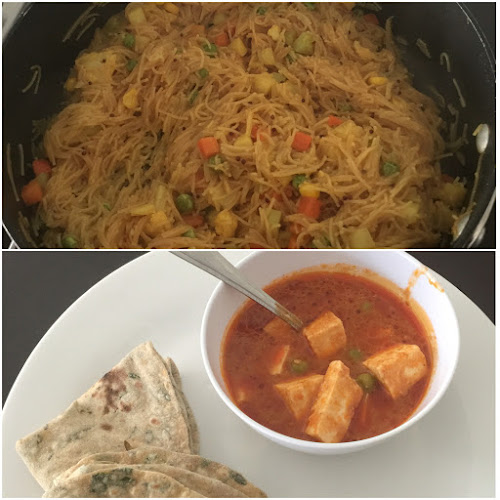 Sunday was brunch with Kama and Kat! It was the best morning and I loved catching up. Now that we have become so regular with our catch ups, I actually look forward to them and planning for the next one. The cafe that we went to was awesome, delicious food and more importantly a playground for the kids! Everyone enjoyed!

We came back and had an afternoon siesta, waking up refreshed. Now let me talk about the movies that I watched. I watched a few but the one that I was watching for the first time is what I will post my review about.

The story is about Ravi Khanna(Amitabh Bachchan) who is a travel agent. He has his mother, disabled sister(Farida Jalal) and a younger brother (Master Alankar) at home. Ravi is the sole bread earner and is happy in his job. He also has a sweetheart Neelu(Parveen Babi) who he meets regularly. One day an inspector(Iftikhar) comes to him to talk about the murder of a man(Rahman) who was last seen by Ravi and who gave a lift to Ravi. His brother has put out that he will pay Rs 5L to anyone who finds the murderer. Ravi cooperated with the police and let them know what happened that night.

Very soon he finds out that he has brain tumour and he has little time to live. In order to look after his family after he dies, he frames himself as the murderer and is convicted and sent to jail to be hanged. On the jail, due to a bout of illness, he is taken to the hospital where he is operated upon successfully and told that he will now live a long life.

The rest of the movie is about his escape from jail and his struggle to find the real murderer. In his quest, he is helped by a petty thief Michael (Pran).

The movie was directed by Ravi Tandon(Raveena Tandon’s dad) and the music was by Laxmikant-Pyarelal. The songs were a hit especially “nahin mein nahin dekh sakta tujhe rote hue”. I liked the movie except that it was dragged at the end. It could have been 30 mins shorter. But it is a must for all Amitabh fans, one of the reasons why he is such a huge star.