The weekend in our house, like every other house, revolves around family. And this weekend was one of those rare ones where we had nothing planned. So it was gonna be a lazy one and you do need them from time to time! How lazy it turned out to be, you decide!!!!

I am an early riser and am a chronic insomniac. So I woke up early on Saturday but I was feeling good and happy. So after having a nice, hot cup of tea with my husband, I decided today was a day of cooking. The weather is changing and there was a nip in the air. An ideal day to make cheese rolls for yash’s recess for school. I had some puff pastry in the fridge and some American cheese blend. It was a quick and easy recipe and best of all, Yash loved it!

I wanted a different breakfast than the usual toast and egg. So I made mathri – some round ones for immediate consumption and some diamond ones for storage and eaten as a snack later. My Nani used to make them for us during school holidays and the tradition continued with my mum who makes them for Yash everyone she is here or when he visits them in india. And Avi loves them, so with so many pressing reasons, I made them. The recipe is fairly simple but it requires a strong hand to knead the pastry dough to make it smooth. Yash was very excited and helped me out. I am pretty sure “Hamara beta khansaama banega”. Look at the pic! 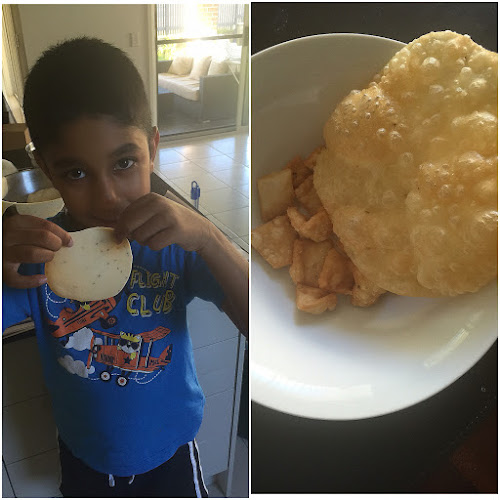 Our afternoon was spent watching television, playing games and siesta. Afternoon sleep is so much bliss especially since it is rare. I remember when we were younger and came back from school, mom would feed us lunch, draw the curtains so that the room was pitch dark, cool the room in summers and we all used to sleep in the afternoon to wake up refreshed and ready to do homework. Life has changed so much! Yash now comes in the evening from after school care, tired, grumpy and in no mood to do homework. Have we really progressed?

The party continued in the evening. It was chicken tikka time! I marinated the thighs and made the tikka in the oven, my first time! We had it for dinner with heated spring onion parathas that I had purchased from Costco the previous day. It was delicious, even if I am saying it as a cook! Yash was in heaven. He made sure that the left overs were kept for him to be devoured the next day and he reminded us that he will not be sharing! Time well spent in the kitchen….here is the picture to prove it! 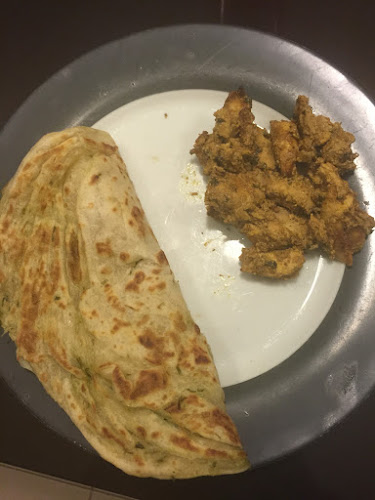 Our Sundays revolve around yash’s swimming. The only time we could get a class for him was at 230 in the afternoon. This means that between the class and Yash practising and playing, half the Sunday is gone! This Sunday was no different. In the morning it was brekkie – no elaborate one this time. A simple toast and egg with Yash and Avi opting for cereal. I then cleaned up the kitchen while Avi did some other housework and before we knew it, it was time to go for the class. Yash made sure that he had the leftover tikka for lunch before he went for the class. He did not want to risk missing out 🙂

Yash was knackered when he came back and wanted to snack. Between him and his dad, they had made quite a dent in the mathris I had made the previous day. So I decided to use the left over flour and make some more to replenish, I was in a cooking mode, so I also made the boys’ favourite – Gulab Jamun! There was some leftover mix in the pantry and it was quick. Both my boys were super pleased!

To end the weekend on a high, I made Prawn biryani for dinner. It is a much loved dish in our household and yesterday night was no different. Next weekend is a long weekend and I am so looking forward to it. Till tomorrow…….