I missed blogging yesterday! I realised after my curfew period and by then it was too late. I am getting very good at maintaining my tech off hours. The last 2 days were busy. Not crazy busy but busy!

I woke up a bit flustered coz it was my driving test. I haven’t got my licence and since the start of this year have been trying to get it. I used to drive in india but when we moved here 12 years ago, we did not have a car. When we got a car, I became lazy and did not make an effort to convert my licence, it would have been easier then! And then we got busy settling with child, house building, moving etc and I became lazier and lazier. With a husband who is fond of driving and is happy to be at the wheel of the car at all times, I was happy to let it slide. Till now…..

With Yash at a stage where he wants to be ferried for activity and our suburb living requiring to drive even for a loaf of bread, I could no longer put it off. So a few lessons and a few frustrating testing attempt, I finally got my red Ps. I can now drive on my own! Avi is pleased that he can now drink and I can ferry him around. I am still not fond of driving but at least I will be independent!

Before I knew it, half a day had gone between the practice, test and getting my licence. I came back to do some household chores which were essential and went to pick up Yash with my newly displayed Ps. We had dinner, watched MKR and it was sleep time.

There are some days when you don’t know what you did the whole day. Yesterday was one such day! I don’t know where the day went. The only thing worthwhile was attending yash’s parent teacher meeting. His teacher’s comments gave me a déjà vu feeling. It was like a repeat of what my teacher used to say. My parents would have a hearty chuckle and would rub their hands in glee if they heard it. I am amazed how much like me he is and every time I get upset with him, I remind myself that I used to be the same. I turned out alright, so he will be fine.

It is Holi today. Holi is the festival of colours and is celebrated around the world by smearing colour on each other, cooking and eating with friends and family. It is a fun festival! I have never liked it too much because in india it also meant taking liberties that you would normally not take with strangers. In the garb of “Bura na maano, Holi hai (Don’t be upset, it is Holi)” colour was thrown on strangers when they were going for work. Eggs and paint were thrown at cars. But the worst was men taking liberties with girls and women in the name of Holi, touching them inappropriately while smearing colour, middle aged men throwing water on young girls and then leching all in the name of the festival. That was the ugly side!

Saying that, I have enjoyed it when we were younger in its milder form. In Australia, we celebrate it in its best form. One of our friends invites us over and the kids throw colour at each other and enjoy. This year she is doing it again on Friday. I will post pictures then. Here is a picture from last year! 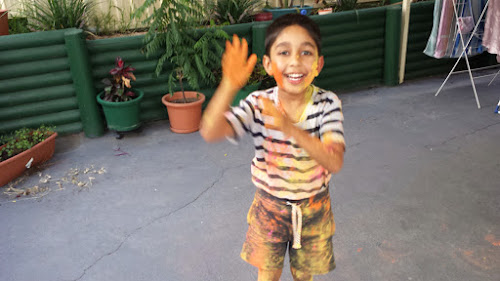 One more day till the long weekend! We have a few things planned as a family, so looking forward to it. Till tomorrow…..